Earthsound are looking forward to adding many more blips to this map in 2018! So far we have carried  out surveys at over 400 locations across all counties north and south of the border.

Out of all the counties on the island, we have carried out most surveys in Dublin followed by Galway, Cork and Kildare with between 30 and 40 projects each. 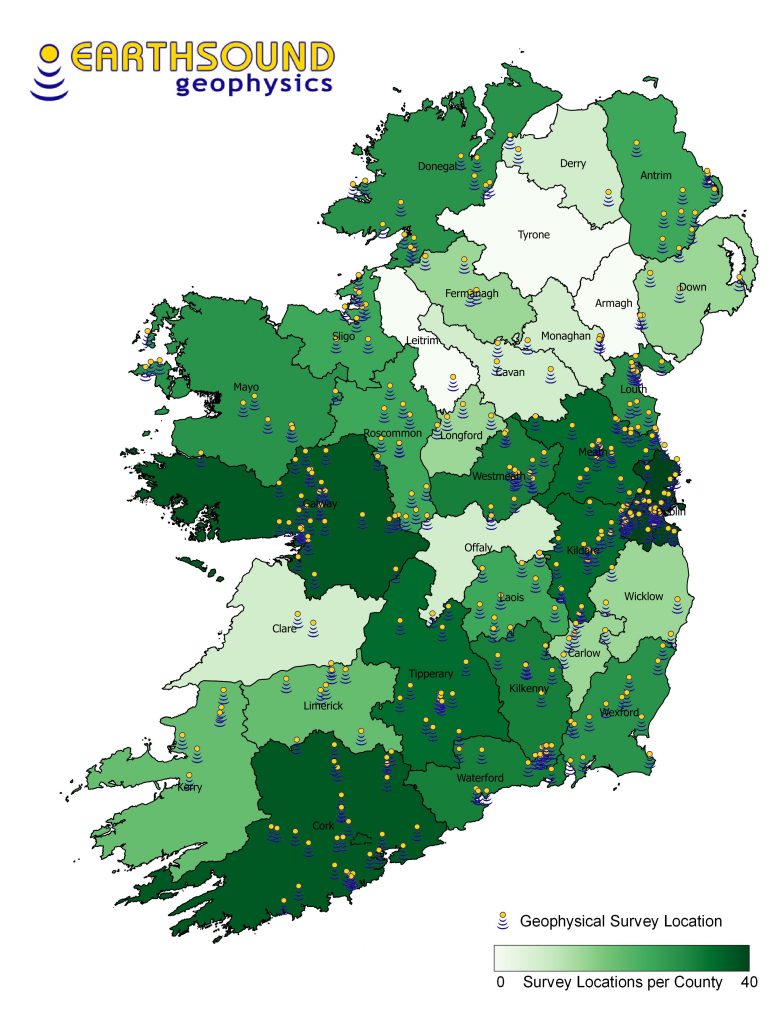 The Earthsound survey team has grown last year and we have braved surveys on mountains and islands. Thanks to the increasing number of Community and Research  projects around the country we were blessed with interesting sites. Hopefully this year will be just as exciting.

Have a look at our website to see what geophysical, geospatial and geochemical services we provide. 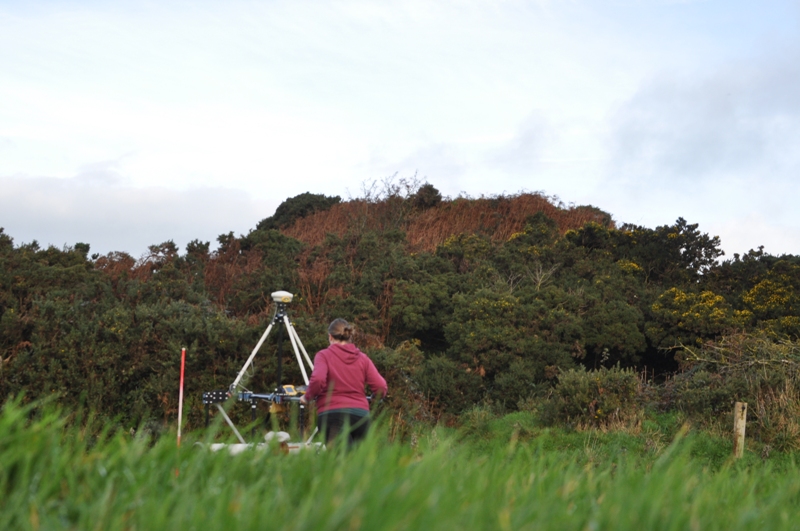 Aim: Earthsound Archaeological Geophysics were commissioned by Ms. C. McLoughlin of Stafford McLoughlin Archaeology on behalf of Wexford County Council to execute a geophysical survey in land adjacent to the Duncannon Bastion Fort as part of a conservation plan being carried with assistance from the Heritage Council, within the townland of Duncannon, Duncannon Village, County Wexford. The fort contains a church and a castle and it is believed that it may originally have been the site of a promontory fort owing to the derivation of the name meaning ‘Conan’s Fort’. Our main objectives were to determine the presence or absence of buildings and possibly grave plots associated with Duncannon Fort which are reputed to lie within the survey area and to investigate for any possible metallic artefacts which may be related to the usage of the fort. Earthsound carried out a comprehensive geophysical study of the site which included Magnetometry, Earth Resistance, Electromagnetic Induction and Metal Detection.

Outcomes: The geophysical surveys have revealed an extensive range of potential archaeological features which suggest the presence of multi-phase occupation. This activity appears to be concentrated in the northern field, while the central and southern fields have been heavily impacted by later activity such as the construction of a cinder block wall and soil deposition. Within the northern field a series of parallel and interconnecting boundaries have been detected. These could relate to agricultural activity or be associated with habitation. A number of circular possible enclosures were identified. These are unlikely to be contemporary with the fort but may indicate occupation on the site prior to the installation of military activity. The presence of numerous possible pits and four possible industrial anomalies as well as a series of possible structures down the western extent of the northern field suggests a large amount of habitation activity once existed on the outer edge of the fort. When the geophysical results are combined with the metal detection ‘hits’ a complicated picture emerges suggesting that the fields, as well as being used for habitation, may have seen warfare or at least the practicing of warfare. Aim: Great Connell Abbey is a site of ongoing interest and has been extensively investigated and researched by Dr. Thomas A. Loughlin of the Irish Hellenic Institute, Athens, Greece and funded by the Kildare County Council Community Heritage Grant and Kildare Archaeological Society Research Grant. The abbey was founded in 1202 as a Priory of the Cannons Regular of St. Augustine, a cell of the Llanthony Prima in Wales. It was founded by Myler Fitzheny, Viceroy of Ireland, who was also responsible for the foundation of the abbeys at Laois, Clonfert in County Galway and Killaloe in County Clare. The site had a period of active usage of approximately 350 years and had a somewhat turbulent history having been ordered to forbid the admittance of Irishmen by King Richard II in 1380  and being destroyed by the native Irish approximately seventy years later and eventually being suppressed in 1540. The site gradually fell into disuse, with a Church of Ireland church being constructed to the north of the site in the year 1780.

Earthsound originally carried out a Magnetometry survey at the site in 2006 which revealed a large amount of the village and structures associated with the priory. In the two seasons of geophysics which built on this as part of Thomas A. Loughlin’s research project, the aim was to focus on locating unknown archaeological remains through the use of LiDAR as well as to investigate possible structures associated with the priory.

Outcomes: The 2012 season located a large enclosure with approximate dimensions of 300 m x 360 m which may represent the enclosing boundary of the entire settlement as well as a number of possible walls and boundaries, pits, structural remains and possible burial pits. A large number of internal ditches and features were also located.

The 2013 season managed to detect a large number of cut archaeological features as well as to identify a number of possible structural remains which may have been associated with an only recently identified mill course.